Alright then. Up next on the magic hit parade of levels (where the hits just don’t stop!) is the City level. What’s that you say? There wasn’t a city type level in the original planning? You’d be correct if you said that, although about the same amount of correct if you wrote it though. Anyway, since I’ve decided that the train concept wasn’t really enough to support an entire level all by itself, and was instead better as a kind of condiment, I needed to think of something different to fill the train shaped hole that was left.
So what I wanted to do instead was do a different kind of level that had different kinds of geometry. I really enjoyed the design space that I discovered when I built the last Hard Level, which turned out to be more of a Base than the sharp hills archetype would lead you to believe. The sharp angles and severe changes in the available gameplay spaces allowed me to do unique stuff with the design of the encounters. A city, which could be all sharp edges for the most part, would do that even better I would think.
The issue though, is that a city requires a bunch of different art. The buildings could all look the same and share textures, but that doesn’t work as well as say, islands or caves would. The uniformity would look both stark and unnatural.
Unless I did something different with the art requirements. So I’m thinking of doing the level in monocolor. Something like this: 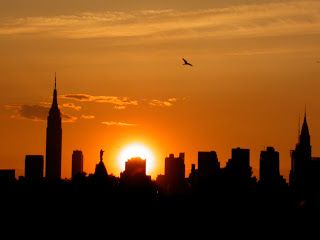 As you could see (provided the link still works in Future Land) the buildings are all just silhouettes. They are devoid of textures, but still have personality. I could also do background in a similar way provided that I blue shifted them enough. But that’s a topic for a different post. Probably one that I’ll get to once I start making the art pieces.

Conceivably, I could also make a small modification to the enemies, to make them match. Not sure though.

Either way, I’m starting to build the concept out in my spreadsheet in 3…2…1…