Skip to content
October 31, 2008 Eric Leave a comment
Seven things on the list, already got 1 knocked off – I’ve stopped level building. Now I’m into considering something terrible – making further cuts. Not for time (although that is always a factor) but for pacing. You see the third level (the Cliffs) is designed to be a slower more cerebral experience, especially right after the combat oriented Crypt and the twitch based Cave In Sequence. However, as a last level it sucks. There is no oomph.
I’m thinking that if I cut game at the end of the Cave In it’ll go out on the high of one of the better set pieces. As it is, it would be like the last level of Devil May Cry being a flying shooter. Wait, crappy example. Better would be comparing it to the last level of Viewtiful Joe being platforming based. Yeah, that makes more sense and isn’t true for the purposes of analogy.
So I think I may do that then. 4 levels. We’ll have 4 levels. Certainly not the most possible or what I really want from a gameplay perspective, but I think that it’ll work and give a really good idea of the concept of the game.
-Um, yeah. The ESRB is expensive. So instead what i’m going to have at the beginning of the game during the title screen load is a TIGRS rating. It’s an independent gaming system of classification. Granted, it means probably less than Zero but I think it will make the game look that much better put together. At least, that’s the hope. The logo I will use is : 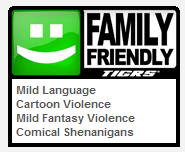