Alright then. Couple of things to talk about today. First of all, school is back in session. So these updates may be less frequent, but more stuffed full of, um, well stuff. Second, I got the City level all working. It looks more or less like this: 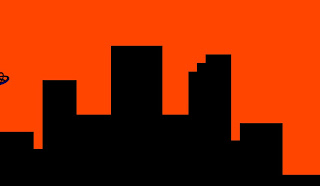 You’ll notice, especially if you look at the last entry in the diary, that this looks pretty close to the kind of thing that I was after from the last image. All in all, it looks correct. But while I was putting the level together I had an idea. You’ll notice that all of the blocks are just black. There’s no outline to speak of for the buildings or anything like that. A small tweak with the color display (i.e. actually feeding a color to the color function that I built a million years ago and then making it specific for a certain stage) and I got the black that I wanted. Anyway, since I didn’t have to worry about the outlines, I could get a little weird with the way the level actually plays. So I went ahead and made everything, all the way to the ground, out of the Gravity Type Ground.

What happens by the way, is that when you shoot the buildings, or enemies crash into them or shoot them, is that they fuggin pancake. Then they leave rubble that you can continue to interact with. It’s awesome. Couple of things, no the physics engine hasn’t gotten any more advanced and the system is basically a cheat. So, yes, occasionally the rubble with fall in such a way as to leave impossible gravity defying gaps. Also, yes, I’m okay with that since making it perfect is less important that making it play well. Using a Zeppelin to lay waste to a city is incredibly satisfying. So much so that if I ever decide to revisit the world of Paper Zeppelin, then I intend to make large portions of the game work the way this one level does, and with a proper physics engine, but that’s tinkering for another time.

Also, the city level is quite easy comparatively speaking. So I’m switching the Train level to the Hard track and moving the City to the Easy path. The weirdest part of the level, is that there is no bomb to speak of. Instead I hid the base inside a building. Bombers guard this domed structure. So if you shoot them down, they fall and create a cascade of destruction fun that destroys the base. I think that by this level the conceits of the game are established enough that I can screw with them and not lose anybody. Also, they’ll be busy getting their Boom on.

Also, while building the City, I realized that the Rockets play like ass. First of all, the timer on them is hidden for all intents and purposes. The timer is based on the average positions of the players when the rocket is fired. Paper Zeppelin is a shooter, so it’s not like those players are going to stay still for very long, now is it? That makes the timer seemingly go off whenever it feels like it. The big explosion makes it even worse and feel cheap and broken. Also, the trajectories don’t really want to play nice for some reason. They work occasionally, but usually don’t. Moon-walking rockets are an all too common occurrence. So to sum it up, they look and play like crap so they are going away. I know, I spent quite a bit of time making them work, but even working as designed, they aren’t very interesting.

So I’m thinking about making something with a little more character and more of a distinctive method of destruction. So I’m thinking mortar bombs. They can be fired, follow a graceful arc up and through the sky and fall back down picking up speed the whole way. Nothing in the game moves that way. The question then becomes, do they fire consistently and create an arc of doom. (L’Arc Doom?) Or do they calculate a player’s position and try to hit them, doing the complex mathematics involved with hitting along the arc? I’m thinking the targeted approach is better and here’s why. If they shoot all the time in the same areas, they create a zone where the players can just avoid them. That’s not interesting. Making them try to target in some way creates tension. The game systems already encourage player’s towards the top of the screen. Having something that will reach out across the screen to lob bombs at you creates the tension of encouraging the player into a dangerous position to take care of something that is quite dangerous if left alone. Also, I’m thinking of making those mortars destroy enemies too. Might be fun. We’ll find out.